The Tel Aviv Museum of Modern Art has an impressive collection of surrealist art. One that caught my attention today was this piece by Yves Tanguy 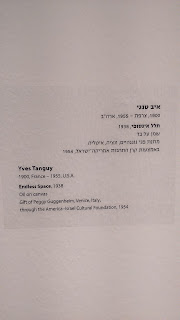 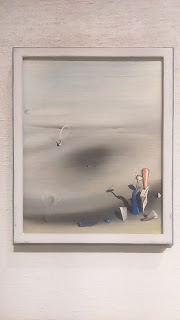 Tanguy is an old favourite of mine. Along with Kay Sage he created some of the strangest abstract landscapes which are intriguing and evocative while also being very cold to the touch. This piece is titled Endless Space, which is translated into Hebrew as חלל אינסופי. Ein Sof (אין סוף) is a term used by (though I don't think they originally coined it) the Kabbalists, to describe the highest unknowable peak of divinity: it translates literally as "without end". For the Kabbalists this was something like the internal essence of God, and stood in paradoxical distinction-from and unity-with the humanistic expression of God's personality, known through the Name YHWH (and it is this latter potency which is expressed in and as the individual qualities of the sefirotic tree).

The Hebrew Sof has, to our ears, echoes of the Greek Sofia: Wisdom, who in one Gnostic myth helped instigate the faulty creation by the hands of the lesser god (through, if I remember rightly, her lust for knowledge of the true God). Ein Sof then appears as that which stands before Wisdom's perceptive attempts to direct thought into a manageable form. In Hebrew "wisdom" is Chokhmah, the second sefirah which stands parallel to Binah (understanding).

In Tanguy's piece, shapes which are at once concrete, admitting some kind of form or spatial solidity, and yet appearing to await form, still not pressed into a shape which fits the contours of human thought, stand as spectators; they seem to be watching the arena for the real action; the arena itself is simply a shadowy depression in the landscape and all we can find there are perhaps two pebbles. The emptiness itself is what creates the impression of endlessness; without specific objects to provide distinction and measurement we cannot tell a millimetre from a light year. Is there also a hint of gravitational pull, the penumbra of a black hole which warps and wraps time and space around itself?

Without End, without beginning; before wisdom and understanding began their process of incubating thought, gestating particularised forms for a comprehensible world; but also that primal chaos which is at the heart of everything, the raw formless nature which precipitates identity, drawing qualities like a cloak around itself.
Posted by Ayin at 18:02