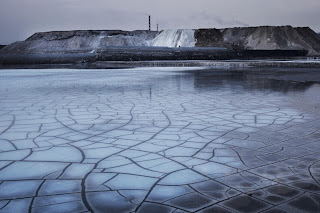 There's an excellent exhibition at the Royal Festival Hall (Southbank, London) at the moment. This year's World Press Photo competition collects several individual photographs and sets (termed in the exhibition  "stories"), including carnivorous plants (and the post-carnivorous which now live in harmony with animals, swapping housing for nutrient-rich droppings - this one also deserves its own link), the effects on orangutans of palm-oil farming in Indonesia, environmental degradation and its concealment in China, the Gezi park protests in Istanbul, the aftermath of the 2014 Gaza war, Eritrean wedding festivities in Israel, the Russian offensive in Ukraine, a transgender community being aided by Sunni groups in Indonesia, the Nigerian schoolgirl abduction, development in Mongolia, and an American community of sexual offenders. 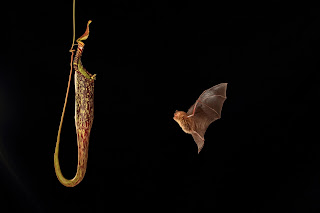 What I found the most captivating was Anand Varma's images depicting that subclass of parasites which actively take control of their host, manipulating it into patterns of behaviour which are necessary for the parasite to continue its own life cycle. Usually these lead to the death of the host, for example in the case of the nematode which, entering ants through the bird droppings they collect, turns its abdomen bright red like a ripe berry, while influencing the ant to walk with its rear end raised - thus making it more apparent to the birds which will eat it, under the impression that it is a tasty little berry. The nematode can only complete its life cycle and reproduce while in the gut of these birds. 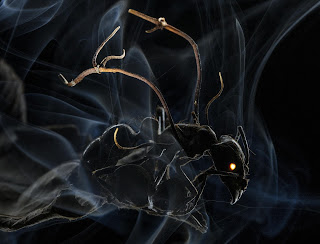 There are many more examples, and I've read about them also in the pages of New Scientist. The most famous, and perhaps concerning, is the   virus which is present in cat feces and serves to influence mice to behave in an unnaturally brave/careless manner, so making them more likely to get eaten by said cat. Some people have speculated that the virus could also be influencing humans who live with cats and are exposed to their feces through a litter tray. 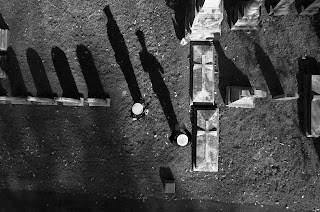 This has made me think about the role that a metaphysical kind of virus can play in the human world. Ideologies such as communism, fascism, religious concepts, and the like, cannot survive outside the human world; they require us in order to reproduce themselves and spread their evolving progeny. An idea such as life after death, or metaphysical salvation must emerge in the context of consciousness. But once it has emerged, once it has become a species of idea or way of looking at the world, it can influence the life and behaviour of some individuals, encouraging them towards attention-attracting lifestyles and preaching which then spread rapidly through a population (think of how quickly Buddha's ideas regarding life and social order spread through India and then the Asian continent). Such ideas may affect our brains but they are not necessarily passed on in our genes; rather they pass horizontally, infecting those we come into contact with, taking control of their behaviour in a way that will, if the idea-virus is to be succesful, similarly influence other people to change their behaviour. The idea can even evolve, incorporating new data into itself from each host, experimenting with new mutant forms, only the most effective of which will survive in any given environment. And so we see how the Japanese form of Buddhism is radically different from the prior Indian, geared as it is towards the way of life and cultural nuances of the Japanese it encountered. 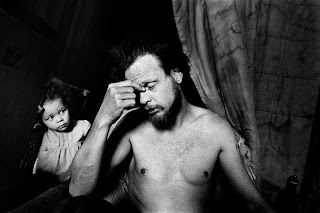 Crucially, there is nothing in this process which necessarily leads to a positive outcome for the human hosts; all that is required is that the behaviour of the host successfully influences others to adopt the idea or a mutation of it. And so we see this in some forms (the most obvious at the moment being Jihadism), which actively drive some adherents towards suicide. Jihadism of course is not the only such case, and it can be argued that the host themselves, under the influence of the ideology, is in a state of bliss regarding their behaviour; much as the Orthodox Christian monk makes themselves incapable of reproducing their own genetic lineage (surely a tragically unnatural outcome for the host), while preserving and aiding the ideology; or, the Indian Aghori ascetics, who remove themselves completely from normal society in order to pursue their devotion on an individual basis, replicating in some way Agamben's homer sacer, the "sacred" man who is condemned and judged to have placed themselves outside society and therefore whose murder is unpunishable; anyone may at any time kill them without consequences. 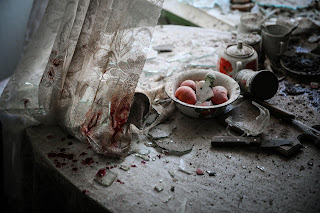 This way of looking at metaphysical postulates, and how they can take on a life of their own which then turns back and alters both individual consciousness and society, is something I find fascinating, and I've been working out some of the implications in recent publications. 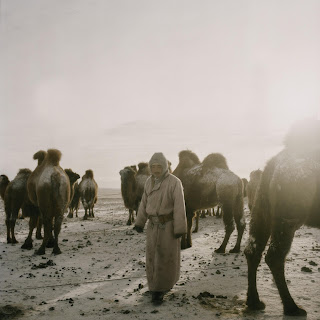 The progressive evolution of these ideological viruses is something we would be wise to contemplate. They are not self-aware enough to keep enough humans alive to preserve themselves entirely. They can influence us in ways that might be devastating for human civilisation. As well as the political instabilities threatened by Jihadism, the Christian American right-wing seems intent on a game of chicken with climate change, which some have managed to incorporate into their own doctrine of apocalypse and redemption; but the outcomes will affect us all. 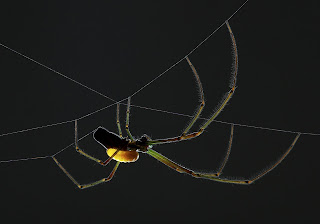