the dual role of photography

A couple of recent articles on photography have made me think about the way we use the photograph to both represent and deny identity.

The first is a review article based on a Swiss exhibition, which explored the soci 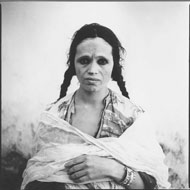 al contract of photography. One particularly moving element of the article is the description of the forced unveiling of Algerian Muslim women by French occupying forces in the 1960's, in order to photograph them and record their identities. Most of these women would have spent their entire adult lives veiled, whenever outside their homes. This forced exposure seems voyeuristic, abusive - and indeed that is what it is. The photographer was well aware of the nature of his role, promising that he would use the images gained to testify against the rule (we are left unsure as to what - apart from exhibitions such as this - such testifying amounted to). 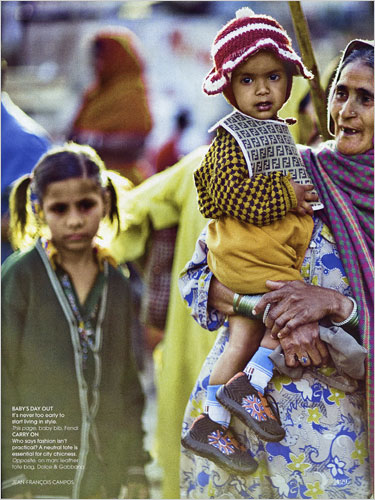 The second addresses Vogue India's photoshoot from August last year, where "average Indian people" (i.e. the rural poor, most of whom are among those living on less than $1.25 a day) are adorned with designer goods whose price tags range from $100 to $10,000. Amounts which are more than these people earn in a lifetime. In these images, the individuals are not named - they are identified simply as a "man" or a "woman".


Strikingly, while in French Algeria the subjects were photographed in order to capture and record their identity, the role of the images in Indian Vogue is the opposite: they deny the subjects' identities. While the French authorities sought access to the private individual behind the veil, Vogue are attempting to conceal the very real social circumstances of these people by depicting them wearing classy consumer items, those designed specifically for people with finances beyond necessity. By not even acknowledging their names (in favour of the names of the goods), the subjects are dehumanised and removed from the sphere of individuality.

In all cases, an image - a representation - has a dual role. It is a gatekeeper, it both guards and allows access to the object in question (that person signified by the image); the representation seems to stand in our way, such that we are severed from the actuality of the object. By representing, it reinscribes the distance between us, the viewer, and the actual which is merely depicted (and therefore denied) before us. Representation speaks of the absence of that represented. It reduces to two dimensions, a static picture is the object derealised.

Yet it also permits, in a way; it brings the actual closer and by a curious dialectic seems to present an essence while denying its presence. Paul Tillich claimed that, unlike the symbol, the sign partakes in the essence of that to which it points. In communicating a meaning it realises that meaning; thus, it provides passage to its signified by not only pointing toward it, but making it happen. Thus while negating the actual, the sign acts as a vessel for it, bringing it into our reality.

The photographs of these people remain a document of the event depicted. They are not 'natural' photographs: they are designed, posed. They exist specifically for the viewer, as the individuals were manipulated into place forthe viewer. Marc Garanger's dual objective in photographing the Algerian women provokes a poignant sense of confusion: he continued taking the photographs, with ever-increasing fervour, in order to unmask the horror which he felt at the regime's demand that he take these photographs. The horror which he is complicit in (as we, the viewer are too) in attempting to rebel by obeying; he wants to unmask the French powers by carrying out their desire to unmask the Algerian women; and in preserving them, he has preserved a record of the occupiers' abuses. He wants to preserve a memory of their cruel arrogance by being the vessel by which that arrogance happens. We are left wondering, does this mitigate his actions, does it abrogate his complicity? And by viewing with the knowledge that this is wrong, are we somehow less involved in the people's humiliation? It seems in wanting to admonish him of blame, we are seeking to free ourselves.

But we are left knowing that we cannot reclaim the identity of the Indian peasants; nor can we remask the Algerians'. The photographs have happened, those depicted in them have moved on and resumed their lives. The document of the events are now present in a world far removed from that in which they originated. Strangely, it may be we the viewer who is most changed by the events, of which we are the final stage.

Credit where it's due: the New York Times' review was first commented on by the excellent photo-blog subjectify. The dubbagol link to the Vogue article was provided by my friend Cerisa (but not on this blog).

Email ThisBlogThis!Share to TwitterShare to FacebookShare to Pinterest
Labels: self, symbol